✉ LOS ANGELES QUOTE
✉ PHOENIX QUOTE
✉ SAN DIEGO QUOTE
What is a Conex box?
A Conex box is a standardized steel box that moves seamlessly between different modes of transport (intermodal) developed by the US military for mass transport of items during the Korean war. Today, the term Conex box and shipping container (or sea can) is interchangeable and describes the same steel box.
Why is it called a Conex box?
Technical jargon and slang both evolve from a desire to shorten wordy sentences, and Conex comes from smashing together 'container' and 'express' to form a new word Conex. It is easier to refer to loading up Conex containers rather than packing steel boxes for the container express. The name stuck, and most people worldwide recognize a Conex box as a standard pest-proof and weatherproof steel box.
A Quick History Lesson
The standard civilian shipping container and the military steel Conex container evolved alongside each other to safely and securely meet the pressing need to transport goods and supplies efficiently across long distances. The military beat the civilians by about four years as the US transport section developed the first steel storage container – imaginatively called the 'transporter' in 1948. The military started with 67 units and grew these useful steel boxes into the standardized container express system where boxes can stack on top of each other (three deep) for bulk transport. By 1965 and the Vietnam war, around 96,000 military-grade Conex boxes supplied the troops with everything from hospital supplies to rations. Two years later, in 1967, the US military used 200,000 Conex boxes, and today the Conex trailer is a versatile part of the storage container landscape. The straightforward concept of transporting goods and equipment in a standardized container meeting international standard for dimensions, strength, and performance revolutionized trade and the transport industry. The first official recognition of alternative uses for Conex boxes came in 1987 when Philip C Clark patented taking these steel boxes and turning them into a home. You can find a Conex box as a pop-up shop, home office, garden shed, or holiday home as often as you see it as a storage solution.
What sizes do Conex boxes come in?
International standards and transport efficiency fix Conex box sizes at 8 ft and 6 inches height and 8 ft width to ease stacking and packing. You can get a high cube or taller Conex box for specialist transport at 9 ft 6 inches. The standard lengths for most purposes are 20ft Conex container and 40ft Conex. You see reference to TEU (Twenty-Foot Equivalent Units) and FEU (Forty -Foot Equivalent Units) as standard Conex box categories. You can find other lengths (10, 25, 45, 48, or 53ft) in circulation, but the bulk of Conex container dimensions are TEU and FEU.
What are Conex boxes used for?
A Conex box's primary purpose is to transport items by road, rail, sea, and air from one place to another. From that specific demand, the versatile Conex box now meets multiple uses involving:
• Transport.
• Storage.
• Accommodation. Almost any industry can make use of a versatile Conex box, and more people are coming up with more inventive uses like:
• Construction industry – secure onsite storage for equipment and materials; site offices; rest and welfare rooms; sales offices.
• Retail – pop-up shops, storage for excess inventory, flexible warehousing.
• Service industry – storage and additional office space both temporary and permanent.
• Education – extra classrooms, storage of examination materials and sports equipment.
• Health – pop-up consultation rooms and storage.
• Hospitality – storage for excess bed linen and equipment.
• Domestic – storage, home offices, studios, and garden sheds.
• Building modules – conversion into homes and holiday accommodation.
• Disaster relief – pop-up medical rooms, offices, accommodation, and transport of necessary supplies and equipment.

✉ LOS ANGELES QUOTE
✉ PHOENIX QUOTE
✉ SAN DIEGO QUOTE
What is the difference between a Conex box and a cargo container?
Cargo container is another name for a shipping container and is the same as a seaworthy Conex box. The rising demand for land storage means not every new Conex box is a seaworthy storage container. A cargo container (shipping container) made from Corten steel and assessed for sea travel is suitable for transporting cargo on cargo ships. A Conex box constructed to the same standards is ideal as a cargo container for marine transport. A Conex box constructed for storage purposes without the seaworthy certification is not a cargo container.
Are Conex boxes waterproof?
A seaworthy Conex box for transporting goods at sea is watertight – it has rubber seals around the doors to keep seawater (and rain) out of the interior. A watertight container can also lock in a liquid and keep it inside the Conex box for transport without leaks. Waterproof is not the same as watertight. A waterproof used Conex box is resistant to water (it keeps the rain out), but it may allow water to seal in -through damaged door seals, for example). Most new Conex boxes are both watertight and waterproof by extension. A used Conex box may no longer be watertight but is still waterproof and gives dry storage for your possessions or goods. An older Conex box nearing the end of its useful life may have exterior damage and leak. The length varies from a standard twenty or forty-foot Conex box to anything from 10ft to 53ft.
Where can I buy a Conex box?
There are over 37 million Conex boxes globally, so when you search for 'Conex box near me,' you will get a range of viable prospects. You can buy a new Conex box direct from the manufacturer, but most are from China and so shipping an empty container across the sea seems pointless, and most people buy a used or almost new Conex box. You can buy Conex boxes from shipping companies, storage companies, and direct from previous owners.
Buying and renting Conex boxes from StorageContainer.com
A Conex box rental or purchase from us is a straightforward process, you discuss your needs, and we give you a range of options and prices in a Conex box quote. The Conex box cost depends on:
• Size – you are paying for cubic feet of space.
• Age – as an indicator of the condition.
• Condition – even a newish Conex box can suffer damage.
• Features – depending on the purpose.
How do you evaluate a Conex box's condition?
When you examine Conex boxes for sale, walk inside, and close the doors. If you see daylight, you know that the box has holes that let in the wind and rain. A visual examination of the outside looks for rust patches that may indicate underlying weakness. We recommend that you complete a visual inspection of any Conex box you intend to buy or rent. You can rely on us to carry out a rigorous grading and classification of all our Conex boxes so we can tell you if it is cargo-worthy and wind and watertight. We also give you an accurate assessment of the underlying structural soundness and construction.
Benefits of buying/renting a Conex box
Conex box rental is your best option if you only need the storage or space for a short period or have limited space on your property for the box and need off-site storage. They are an excellent place to store your house contents while remodeling or providing temporary space for an event. Renting limits your costs to the time of use, and you don't have to consider repairs or maintenance. You get the Conex box you need and return it to the contractor afterward. Buying the Conex box is a better option if you need long-term use for storage, a home office, or any other project where you will modify the container. Owning your Conex box represents a long-term saving on costs (although you need to maintain it to prolong its life) and gives you creative freedom.

Storage containers give you affordable extra space at a fraction of the costs of alternative options, like moving to a new house or building an extension to your business. That low-cost space can give you storage or working room.

You choose the amount of space you need and how long you need it. You select what you need and can buy for a permanent solution or rent for a temporary one. Storage containers give you the freedom to choose.

Getting hold of warehousing or a commercial office in a couple of days is difficult. Renting a storage container is quick, easy, and affordable. Mobile storage containers go where you need them, or you can go to them.

Storage containers keep your stuff safe from people and weather. You choose what space you want to secure – a construction site, home, or mobile warehouse. Rest assured your possessions will be safe from weather damage

How do you know which type of Conex box will fit your project?
If you can define your project in terms of cubic feet, you can find a Conex box that fits your needs, but some of the other points you must consider before making your selection include: 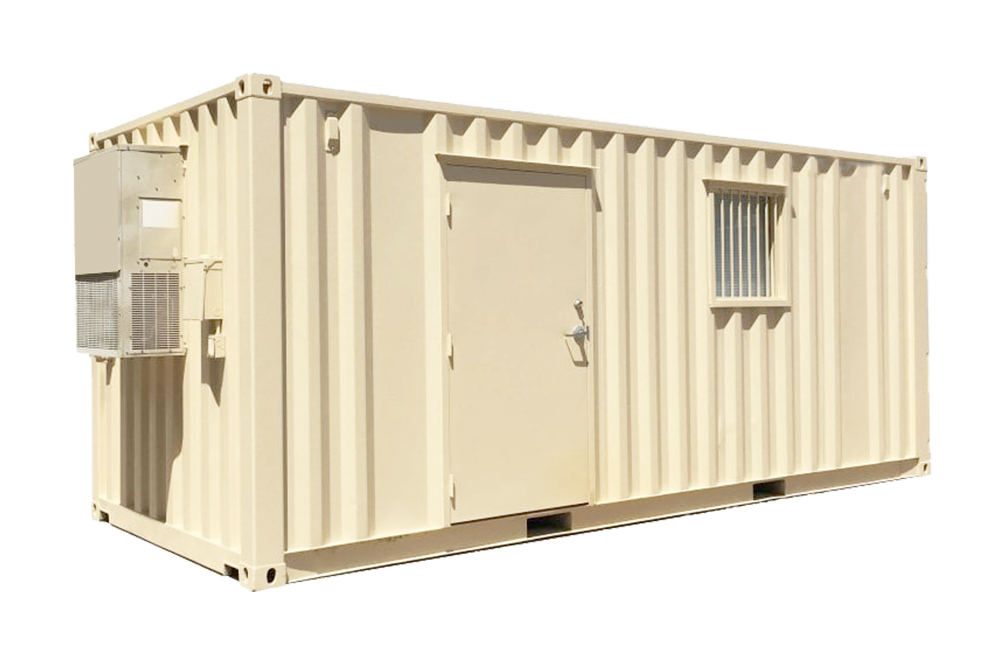 • Buy or rent – if you buy, you can modify as much as you want. If you rent, you need the hirer's permission, and changes are modest.
• Opening system – you get end and side openers. If you are planning to dismantle a side wall, a side opener saves you some work.
• Previous use – your used Conex box may have flooring, insulation, and shelving that may be useful for your project or need removing.
• Delivery and installation may be part of the price or an additional expense and logistical problem for your project. If you define what you want to achieve with your project, you can apply your criteria to select the best Conex box available within your preferred budget.
Top Reasons for Using a Conex Box in Your Projects
Versatile Conex boxes find many uses by businesses and homeowners because they are:
• Easy to customize – add a window, subdivide, join together. You get endless options for changing the standard Conex box into functional space for you, your family, and your business.
• Modular – a range of sizes and a standard shape lets you assemble a building structure of many rooms and levels with ease.
• Durable with a base of high-quality Corten steel, the Conex box has a whole life span of around 25 years, but you can get fifty plus years with cladding and maintenance.
• Stack for multi-level projects – a Conex box construction allows for stacking on top of each other with reinforced edges and locking corners.
• Keep out the weather - a Conex box is wind and watertight. If you want a hurricane bunker or a home to withstand severe storms, Conex boxes are ideal.
• Pest proof – on land, no bug munches on steel, so you don't need to worry about termites or other insect pests destroying your Conex box.
• Secure and safe – built to keep out weather, pests, and potential thieves, the Conex box is secure, and you can add additional security features.
• Affordable, quality living space – Conex boxes convert into insulated and air-conditioned rooms that are indistinguishable from any other living space but available quickly and at a fraction of the cost.
• Eco-friendly – building a container home or office reduces construction work, energy, and waste involved in a project.
• Portable – when you move home or offices, you can take your Conex box project with you on the back of a truck.
• Speed – you can complete the modifications to your Conex box off-site and have the completed module delivered and ready to use.